If Christmas is a time for giving, it really is living up to expectations – especially in the world of social media.

From one girl’s perfectly-lit selfie to Cruz Beckham’s Christmas single, social media really is, well, a gift that keeps on giving.

Whilst out with friends, high schooler Jane seriously struggled to get the right lighting for a photo (one that the Kardashians seem to have had shining on them since the womb). Until this happened:

the team helped me out with good lighting to take a nice pic of me eating pizza pic.twitter.com/dZdYa11Yep

Turning on their phone’s backlight to create something of a celestial halo, Jane’s friends lit the way for her selfie domination. Quite literally.

Twitter saw a divide in reactions, ranging from amazement to absolute disdain (but mainly the latter):

Cruz Beckham is 11 and has a Christmas single out. I'm 28 and my mam just rang me to make sure i had a jacket on🤔😭😶

#CruzBeckham getting Christmas number one would sum up the ridiculousness of 2016 perfectly! #IfEveryDayWasChristmas

And, of course, what would any Twitter commentary be without a sensationalist Piers Morgan column?

***NEW COLUMN***
The greedy Beckhams have sold their 11yr-old son Cruz's soul to the Fame Devil. Shame on them. https://t.co/X2xotR1SM7

With everyone putting in their two cents’ worth on Cruz’s high-pitched jingle, Dogs Trust saw it as the perfect marketing opportunity:

Cruz (the dog) definitely has the A-lister look.

Wednesday was every Christmas fanatic’s favourite day of the year — #NationalChristmasTreeDay.

A Grinch who stole Christmas:

I'm getting the impression, somebody is sitting at home making these 'national days' up.

And a very hipster interpretation of art:

Barking up the Wrong Tree

On the topic of #NationalChristmasTreeDay, one tree unveiled in Montreal, Quebec left many….stumped.

Attracting the public’s attention for all the wrong reasons, the Christmas tree has since been dubbed by the Twittersphere as #1 most ugly Christmas tree in Canada.

So, how does a Christmas tree hit back at the haters? It creates its own Twitter account and sends this:

It may the #1 most ugly Christmas tree in Canada, but it sure knows a thing or two about retort.

If Looks Could Kill 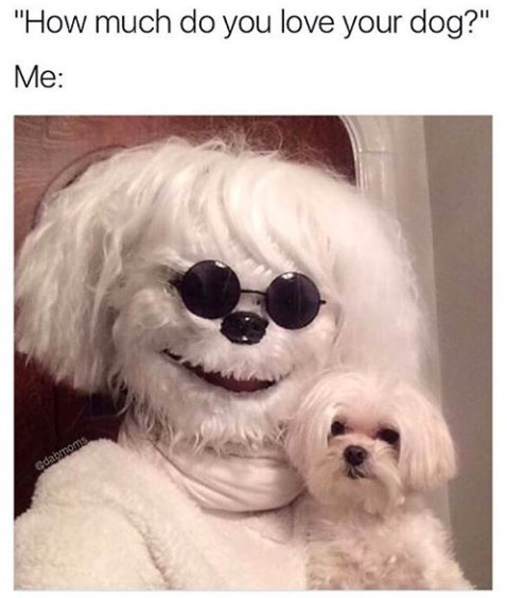 In the case of Topher Brophy and his Aussiedoodle dog, Rosenberg, their friendship knows no bounds: But, honestly, anyone with a name like Topher Brophy has got to be destined for greatness.