If an Apprentice judge can become the 45th President of the United States, anything can happen.

Like an onion reaching social media stardom, a feisty emoji petition and a KFC scented candle going viral for all the wrong reasons. Don’t believe us? You’ll just have to read on…

This past Wednesday will probably go down as the funniest glitch in Twitter history.

A number of users noticed that when you searched “asshole”on Twitter, the first suggested result was none other than U.S. President Donald Trump.

Haha, type "asshole" into Twitter's search bar. Do it.

As Trump’s account lacks any of the featured keywords, many began to speculate that Twitter’s search algorithm was programmed to do it on purpose.

Though it would be a great thing to believe, the most likely cause is Google bombing – a tactic (performed by seriously clever SEO pranksters) that involves artificially elevating a website in Google’s search results ranking by linking it to a particular word or phrase.

Back to trolling algorithms, though. Might we be looking into the Internet’s future?

A Taste of Fame

Speaking of trolls, Trump better watch his back: there’s an onion on a mission.

@HalfOnionInABag has its eyes set on the prize — to upstage Trump on Twitter:

What if this account that is simply half an onion in a Ziploc bag ended up with more followers than @realDonaldTrump? pic.twitter.com/D28lODPZLO

I won't clog your feeds. I'm just here to get more followers than @realDonaldTrump & then hopefully be used on a hamburger or in an omelet.

With 617k followers and counting, the Twittersphere is realising the absurdity of the situation… and they’re okay with it:

Today I started following half an onion in an attempt to annoy the current president. The future is weird. https://t.co/QOSkeg7BW9

Besides attempting to beat the leader of the free world on his beloved social media platform, @HalfOnionInABag is dabbling in a bit of trolling on the side:

Eric Trump always looks like he accidentally bit into a whole raw onion & is trying to act like he meant to and that it actually tastes good pic.twitter.com/SNFPL4RlSe

Whether Half an Onion succeeds in its mission, one thing is certain: a new, pungent flavour has been added to the political mix.

*Red* with rage that Apple’s iOS doesn’t cater to the ginger-haired community, more than 20,000 have signed a petition for an emoji update.

“Redheads. In all their glorious gingerness, they’ve been missed out. Again. If you say you’re going to diversify, why not add a few red-haired emoji in the mix?”, a spokesperson behind the petition has stated. The petition’s efforts seem to have worked, as executives in Silicon Valley are set to discuss plans to introduce a redhead emoji into phones and computers worldwide.

Gingers really do have souls.

You Are What You Eat

When New Zealand KFC turned its signature fried chicken into a scented candle last year, the Internet was simultaneously disgusted and intrigued:

KFC has a fried chicken scented candle out for the holidays.
Because nothing says Happy Holidays like extra crispy depression?

I NEED THE KFC SCENTED CANDLE

On the sixth day of Christmas my true love gave to me, a chicken scented candle from KFC

One Twitter user in particular asked a very pertinent question:

KFC-scented candle – Can you still lick your fingers after touching it? https://t.co/hrWAxsRYpK 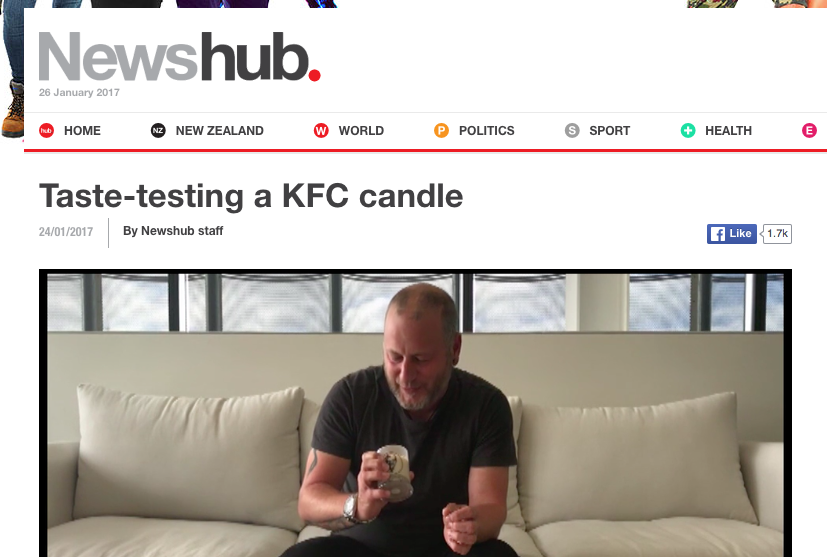 And, to summarise what we’re all thinking but don’t want to say: