Finstagram: what you need to know

Finstagram: what you need to know

We live in a generation where your Instagram feed defines you. We spend hours on end aimlessly scrolling through streams of infinite content, deciding whether to “like” it and then subconsciously judge other people before scrolling down to the next.However, society seems to be letting go of this “perfect life” concept on Instagram and the pressure to create a beautifully curated Instagram account is slowly easing off. This made us wonder, has Gen X reached a turning point? Should we have had to reach one in the first place?

By now, we are all aware that social media has had a tremendous impact on our culture, in business and our lives at large. Social media websites are some of the most popular haunts on the Internet and they have revolutionized the way people communicate and socialise, as well as expanding business opportunities and networking.

However, aside from seeing your friend’s new baby on Facebook, or reading about Scott Disick and Kourtney Kardashian’s split on Twitter, what are some of the real impacts that social media has had on our society? The average person will spend nearly two hours (approximately 116 minutes) on social media each day, which translates to a total of 5 years and 4 months spent over a lifetime. Woah. That’s a whole lotta scrolling.

For many people (especially teens), it has been proven that society along with social media shapes the individual’s idea of what beauty is and without it, and the concept of “FOMO” (fear of missing out), can start in adolescence. The portrayal of this so-called Instagram “perfect life” provokes insecurity and inferiority complexes in people as they fear that others may judge them for not pursuing the idyllic life or not having the “perfect body” or “perfect face” that the person above them on the Instagram feed does.

We need to take inspiration from plus size role models such as Marilyn Monroe and more recently British born- Charli Howard. Charli knows better than anyone how misleading beauty standards can be, having been sacked by a modelling agency for being ‘too big’ at a size 6. She describes herself as “living proof how being thin does not make your life better.” She took to Instagram with confidence embracing and showing off her voluptuous curves (Ed’s note: Shout out to you Charli!). Similarly, Marilyn Monroe, known as one of the most beautiful women ever to live, was a curvy plus size model, and would now be a UK size 16. This shows just how drastically beauty standards have changed over the last 50 years. This makes us wonder how and why perceptions have changed so extensively and if the media is solely to blame? 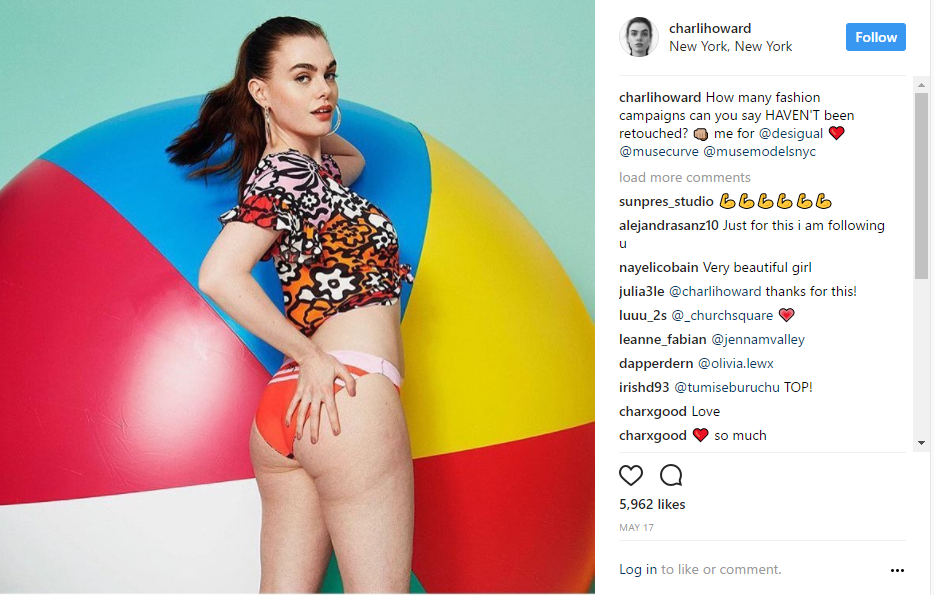 We’re used to worrying about the impractical ideals that Photoshopped magazine models give to us, but what happens when the person next door is Photoshopped too? Even more confusing, what about when your own profile doesn’t really represent the person that you feel like you are on the inside? We need to be comfortable with the idea that social media feeds just aren’t everyday life; people crop out (literally and metaphorically) the so called “ugly” parts of life and refine the bits they do want people to see. Superficially this is all well and good  but for real, it’s all fake, lies and a whole lotta Photoshop!

Back in 2006, Dove presented a “real beauty” campaign, one of which was called “Dove Evolution.” This showed a women going from being completely natural to being caked in makeup, exposed by artificial lighting and picked apart by Photoshop. The ultimate image that was used in the campaign just simply wasn’t her, as every part of her had been either ‘slimmed’, ‘airbrushed’,’ enhanced’ etc. This campaign is eye-opening as it shows just how you simply can’t believe everything you see on social media.

Cue the concept of “Finstagram”. You must be wondering what the heck is Finsta? No, it’s not the latest new app. “Finsta is a fake Instagram account that helps the individual avoid persecution from sororities, jobs and society as a whole.” according to Urban Dictionary. So the real Instagram accounts are the user’s fake selves, and the fake accounts are their real selves. Confused? Let us enlighten you.

Finsta is an opportunity to unleash your true self that is hiding beneath your #selfie on Instagram, exposing the not so “picture perfect” aspects of your life. This proves how Finsta may be Generation X’s saviour. It’s a place to let your guard down and let go of the constant worry of how many likes you’re getting. We’ve finally reached a turning point where the fear of showing “you” is no longer lingering, but should it have been there in the first place? Unfortunately, in our society there will always be anxiety regarding not being perfect as the media shoves the idea of “perfection” under our noses every day so we can’t help but think we need to pursue this. What we need to learn is that no one can be perfect all the time and it’s okay to show your imperfections, even if it’s a little out of your comfort zone.

About the Author: Catty Holden