What do you get if you cross a snowboarder with a stethoscope? Team GB’s pro snowboarder Gary Bartlett, that’s who. Combining a summer career of medical practice with winters spent training with the British Snowboard Cross Team, GP Gary has his sights firmly set on Beijing 2022. Gold medals all round.

#2. That’s no surprise. What gets you up in the morning?

#3. What do you truly, honestly think of social media?

#4. Think of it as a giant slalom run. Some obstacles and red flags along the way, but jolly good fun nonetheless. Kindles or books?

#5. What do you think is the biggest challenge to your industry right now?

Succeeding. It’s so tough at the top; everyone is exceptionally amazing and there’s not much that separates the field. Trying to succeed, to get to the very top, is so difficult. You are always looking to make that 1% gain which might give you a slight edge over your competitor.

#6. Wax on, wax off. What did you want to be when you were growing up?

Funnily enough, I wanted to be an athlete. When I was seven, I remember having a conversation with some people in the pub where my mum worked that I wanted to be a track and field athlete. Everyone told me that it would take a lot of dedication and determination. I never thought it would actually happen. Lo and behold!

#7. Well as they say, if you wanna be the best, and you wanna beat the rest, dedications what you need. What led you to your current career?

Just the desire to snowboard really. Always wanted to do a snowboard season but I was too busy with school and then university. I had no snowsports background but got the bug aged 10 after childhood holidays, received this opportunity and seized it with two hands.

#8. Can you use your favourite word in a sentence?

#10. What advice would you give to your younger self?

Just to keep snowboarding. Any opportunity you get to go on snow, go for it. Stay enthusiastic and remember it’s normal to get disheartened and fatigued. Keep on with it and you’ll get there.

#11. Pretty good motto for life, that one. What’s the best thing anyone’s ever done for you?

One of my British teammates offered to wax my snowboard for last season’s races. That was a huge deal. It can take hours and I was really busy at the time. It was a hugely generous offer especially considering he’s my competitor.

Medicine or anything? (Ed’s note: everything) Medicine-wise, I think graduating, being the first person in my family to go to university.  In terms of snowboarding, having the courage to go to the Team GB trial. It’s so easy to sit back and think nah, I haven’t got a chance. Taking part in that trial was one of the biggest things that has ever happened to me really and reminded me not to worry about the consequences and that I could be surprised about what might happen.

I’d have to thank my dad for always supporting me and giving me opportunities.

#14. Can you give us a timesaver of the day? Apart from finding a mate to wax your board.

I’m not very organised anyway so I’m always working on that! But definitely being prepared the night before. When we’re training as a team, I try to prepare my clothes, my lunch and kit the previous evening. Otherwise I’m going to get left behind.

Definitely way more popular than it is now. Even in the last couple of years, the popularity of Snowboard Cross has rocketed. I think it’s only going to go from strength to strength, with more young people getting involved and hopefully, well, what I’d like to see, is more in the UK in terms of Snowboard Cross development. So at the moment, once, maybe twice a year, there’ll be a Snowboard Cross track – that number needs to increase and as the popularity of the sport increases in turn, that will change. I’m trying to do my bit to help that.

I was GP training, dreaming of a white Christmas.

#17. There’s a song there if you look hard enough. What’s an interesting fact about you?

I use my fork in my right hand.

#18. And we thought we were the ones with the clever fingers. If you could have a 24-minute Skype chat with anyone, living or dead, who would it be?

It would have to be Pierre Vaultier (Ed’s note: Olympic Gold medalist and World Champion snowboarder) to know the secret of his amazing technical ability. He does the slightest movements which just seem to propel him down the course. How he prepares for a race, what’s his mindset around training and racing, that would be amazing.

#19. That just gave us all the feels. All of them. What’s one word you’d want people to describe you with? 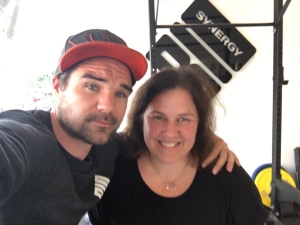 So I follow lots of snowboarders really. Pierre Vaultier of course, I just love watching him. And Shaun White, who’s this amazing American half pipe rider who has pushed the boundaries of snowboarding. He’s come up with all these new tricks. Probably one of the best snowboarders in the world.

#22. What’s one quote that defines your work ethic?

Hanging out with Emma (Ed’s note: enough, already) and meeting the team at Bio-Synergy, one of my fantastic sponsors.