Just when you thought an attractive man in uniform couldn’t get any better, you find out there’s a kitten involved. Tigger the kitten accidentally travelled 300 miles by clinging to this beautiful, Naval Air Squadron helicopter pilot’s car bumper. To be fair, I’d cling to his bumper for 300 miles too.

They are now looking after it while they try and trace Tigger’s owners on Twitter – with the hashtag #OperationTigerKitten. They hope to have the mission complete by the end of the week, but if not, I’ll have it, as long as it’s hand delivered by him.

Some pugs are born great, some achieve greatness and some have greatness thrust upon them. For Doug the Pug, he’s hoping that the great and the good on the Ellen DeGeneres show will grant him an appearance. How? By dressing up as Finding Nemo and spreading the word on social media of course. Judge for yourself if this is an Ellen-worthy pug.

Ben posted this snap on Twitter of a Google search his nan did. Yes ‘awwww’. It  went viral.

Dearest Ben’s Nan.
Hope you’re well.
In a world of billions of Searches, yours made us smile.
Oh, and it’s 1998.
Thank YOU@Push10Ben

Sausage roll superheroes Greggs announced this week it plans to start selling sushi. What could be worse than sushi from Greggs you ask? Well, here’s the answer. This tweet –

Remember when that Kardashian baby daddy accidentally posted a full email in the caption of a sponsored Instagram post? Supermodel Naomi Campbell did exactly the same yesterday. Awks. Perhaps we should write a blog for influencers on how to copy and paste more accurately? 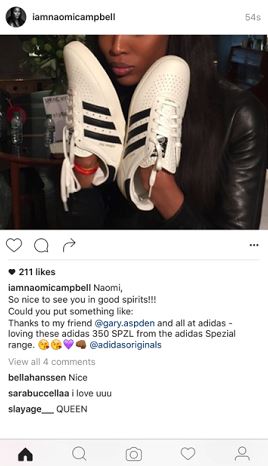