The wonderful world of social has had us in a range of emotions this week. Here are some of the best bits…

As you would have probably seen, Facebook newsfeeds were overtaken this week by endless #backtoschool photos. Our personal favourite came from Bangkok’s most popular cat, Johnny.

This little girl put a huge smile of everyone’s faces when the Seattle Mariners shared a gif of her and her cotton candy at their baseball game.

All the attention took its toll on the little tot, as her dad shared this sweet snap of her sound asleep after the game.

Thanks @Mariners Beatrix sleeps the deep and satisfied slumber of an M's victory! pic.twitter.com/GBkb2kAez8

The Rio flame is still burning bright with Team GB on fire at the Paralympic Games, having won 11 medals – including five goals on just the first day. We’re super proud.

An anti-litter app, Littergram, has been given until the end of the week to change its name by Facebook. Lawyers for the US photo-sharing giant Instagram, which is owned by Facebook, said the name was “not acceptable” and could be infringing on their trademark. 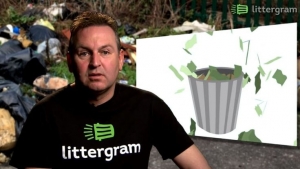 Littergram is an app that invites people to share pictures of rubbish on their smartphone and report it to the local council – a far cry from what Instagram does but Facebook have said they are “obliged to protect its brand”.

American National Railroad Corporation, Amtrak, had a bit of a blunder on Twitter this week, when it was noticed they had replied to someone STUCK IN A LIFT 7 months after the incident. Oopsie. 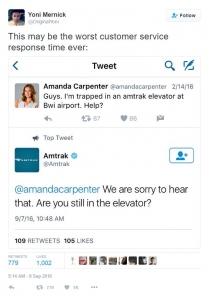 @amandacarpenter Not our finest hour yesterday. We'd love to offer you an Acela ride on us for the inconvenience back in February.