It has been a champion week for Team GB, as Rio 2016 became Britain’s most successful Olympics to date, and it would seem that social media followed the winning suit…

American gymnast Simone Biles became an Olympic celebrity this week (online searches for her name increased by over 230% in the month of August AND she has gained over 2 million Instagram followers) as she made history by becoming the first woman from the USA to win four gold medals at the Games. But her new-found fame didn’t stop the 19 year old from totally fan-girling when she met Zac Efron this week…

We would so be the same, Simone.

The NHS have relaunched their successful #MissingType campaign to boost vital blood donations globally. Companies and individuals alike joined in on the very important cause by removing A’s, O’s and B’s from their account names – highlighting the need for these blood types.

As, Bs and Os have been disappearing around the world! Join in and remove yours #MissingType https://t.co/wQNVsMUgt1

Well this is a tube map with a difference! Thanks for supporting #MissingType @TfL! pic.twitter.com/WWeiufi1Hg

Do your bit by registering to donate here.

When most people find a bug in their fruit and veg, they usually complain. But when Abigail Louise Tysoe wrote to Tesco on Facebook, it was simply to let them know that the caterpillar (named Jeffery) found in her lettuce was alive and well. 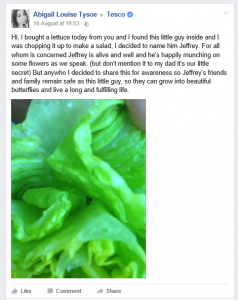 The post went viral when Tesco gave this clever response.

On Thursday 18th August, A-Level results were published and universities, colleges and students celebrated online in their masses.

Even if some didn’t get the grades they were hoping for, Twitter still managed to put a smile on their faces.

If your A level results are disappointing, don't worry. I got a C and two Us, and I'm currently on a superyacht in the Med.

Disappointed with your #AlevelResults? Don't worry we got a D, an A, a V and an E, and started our own TV channel.