An irreverent review of social media business news with Rebecca Davies-Nash, head of content at 24 fingers.

See other professionals in your network

So, to recap, that’s a PC-based software developer buying a professional social networking site. Does this strike anyone else as odd?

For LinkedIn, that has seen its share price slump by a quarter since a £5.6m loss was reported in February this year, the financial gains are obvious – but for Microsoft the transaction seems less beneficial; especially in light of LinkedIn’s assertion that it will “retain its distinct brand, culture and independence.” So Microsoft has bought a loss-making platform, won’t even get mates’ rates. What am I missing here?

No wonder LinkedIn’s peeps are looking so happy. 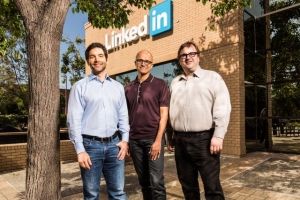 As reports of another horrifying mass shooting in America filtered through the media on June 12th, there was little chance of finding any element of good news amid the tragedy. That is until Facebook stepped up and put into action its ‘safe’ button feature that allows friends and family to see the status of any loved ones they may be concerned are caught up in the event. The same feature was used in the Paris attacks in November but this was the first time it had been used in the US. The ‘safe’ status will have brought instant relief to hundreds in Orlando.  Well done Facebook.

All hail the power of the emoji. I remember when these little faces first started to appear – primarily at the end of curt emails to show that the sender was being neither rude nor angry, just time-poor.  Now these little smiley faces (amongst other things) are everywhere and being given pride of place by Apple on its latest round of updates to iOS and Siri.

The new range includes improved image sharing, the ability to add animations to messages and an ‘emojify’ function that will automatically translate text into an appropriate emoji. It’s the latter feature that is the cleverest move on the part of Apple. It helps people that aren’t emoji-confident to use them and it shows Apple’s made progress in text-recognition AI that still leaves the power in the hands of the user.

Snapchat, still reeling from the news that its user base has passed that of Twitter with 150 million people using it daily, is keen to capitalise on its popularity. By ‘capitalise’, I mean make some money.

It will begin showing ten-second vertical video ads in between users’ stories though it promises not to interrupt photo and video feed from friend’s updates to do so.

The shortness of the ads could encourage advertisers to get as creative as the platform they are on and, based on the user’s feed, ad placement could be an advertisers dream. It’s a win-win, if done well.

It’s not the first social media platform that has allowed advertising in order to stay as a free service; Facebook for example allows ad placement and ‘suggested posts’ on user’s home feed, supposedly based on the user’s interests. Not sure why are mine are always for slippers though.

About the Author: Rebecca Davies-Nash

The wittiest writer, discerning cocktail drinker and grammar Yoda you could ever hope to meet. Ah, who am I kidding? I’m not that discerning when it comes to cocktails.