From Tesco to typos, it’s fair to say a lot happened this week on social media. 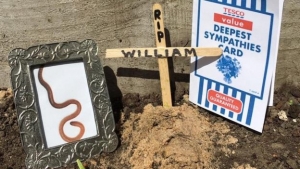 Tesco managed to worm their way out of a sticky situation this week with another hilarious response to an unexpected guest in a customer’s meat and two veg. Wes Metcalfe, of South Yorkshire, purchased a cucumber from his local shop earlier this week, only to discover a lifeless-looking worm inside the packaging. He took to Facebook to let Tesco (and the world) know what had happened in a post that has since gone viral. Very viral.

As Wes Metcalfe said, “If they hadn’t replied in such a fun way, then it probably wouldn’t have gone so big on the internet”. Indeed, as he informed the supermarket giant that he would be holding a funeral for dear William the worm, they wrote back with a touching eulogy:

As we gather here today for William the worm,

It’s time to reflect on the lessons we can learn.

Now, this poor worm’s life was cut far too short,

After he was crushed to death in a cucumber I bought.

But let’s not focus on who’s to blame.

Tesco have apologised admitting their shame.

As we resume William’s body into the mud,

Please don’t shed a tear. Instead, think of the good,

For William’s death has brought us all here,

Before his death, William was completely unknown,

Spending his days in the mud on his own.

But now his name has travelled wide and far,

William the worm – the viral superstar!

After months of anticipation, the Night Tube finally launched in London this weekend. No more running for the last one at the end of the night – for those travelling on the Victoria and Central lines at least.

#NightTube launches tonight on the Victoria and most of the Central line! 🌙😃 #LondonIsOpen https://t.co/O9Y4pwy1sc pic.twitter.com/zgQ6SQSPD8

What was it going to be like? Well, fortunately (as ever) it was heavily documented on social media, with some very amusing updates:

Whilst Team GB may have won big at the Olympics this year (*whooops*), the fail came when they arrived back from Rio. Proudly donning their matching Stella McCartney designer uniforms, it was when they got to baggage claim that the team realised there might be a small problem.

When Piers Morgan took a nasty swipe at the Indian Olympic Team, the country didn’t hold back in defending itself.

As did the best-selling author, Chetan Bhagat, misspelling Morgan’s first name in the process.

It's Chetan. And sorry about the trolling. I get my fair share. Celebration or outrage, we tend to overdo.Clearly 🙂 https://t.co/Wkc6UWUIND

oops. And sorry about piers peirs pears. It's piers. Noted.