An irreverent review of social media business news with Rebecca Davies-Nash, head of content at 24 fingers.

Bloomberg reports that Snapchat sees an average of 150 million users a day, up from 110 million users in December. Wait a minute, that’s more than Twitter.

It’s likely that the video and image sharing site has overtaken Twitter as a source of ‘breaking news’ thanks to its Discover section. Or it could be down to the fact that users can draw pictures of vomiting unicorns to share with their friends and that’s always going to be more fun that trying to express yourself in 140 characters.

Pew Research Center’s ‘News Use Across Social Media Platforms 2016’ report found that Facebook, Twitter, Instagram, YouTube and Snapchat are the new go-to sources for the latest news. Increasingly, consumers are rejecting mainstream media in favour of updates and social comment on the day’s stories while browsing friends and family’s activities.

Facebook saw the biggest jump from 47 per cent in 2013 to 66 per cent in 2016. Plus it’s possibly the only place you’ll see the sad news of Muhammad Ali’s death next to a picture of your sister’s new car.

Rightmove is testing a virtual reality viewing platform for exploring properties from the comfort of your own home. Admittedly there’s a fair bit of faffing with hardware and software compatibility and at the moment there’s only two properties that have been given the GoPro tour treatment but still, it has to be easier than this approach

Other estate agents have begun to venture into this brave new world too, keen to keep up with consumer demand and stay ahead of the competition.

Just when everyone thinks they have a handle on how to make the most of digital and social media along comes some clever clogs to show you that you haven’t seen anything yet. The Washington Post showed the world just how it’s done with its Snapchat footage of daily commutes from around the world.

‘But isn’t that as interesting as watching paint dry?’ I hear you ask. No. Surprisingly.

Tokyo’s metro system is so clean and safe that children travel unaccompanied; London’s tube is filled with announcements and rules and people tutting at hapless tourists who stand on the left (but we already knew that); Paris’ metro is characterised by chic people, good coffee and plenty of ticket inspectors; while Delhi’s commuter is faced with a bustling city and women-only carriages.

Sadly none of the commutes involved this though 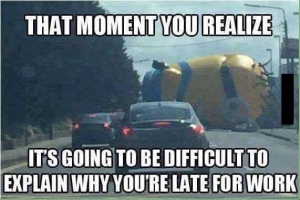 “Oh Deep Thought,” said Loonquawl nervously, “Do you have the answer? To the great question of life, the universe and everything?”
“Yes,” replied Deep Thought.
Both of the men had been trained for this moment, their lives had been a preparation for it, they had been selected at birth as those who would witness the answer, but even so they found themselves gasping and squirming like excited children.
“And you’re ready to give it to us?” urged Loonsuawl.
“I am.”
“Now?”
“Now,” said Deep Thought.
They both licked their dry lips.
“Though I don’t think,” added Deep Thought, “that you’re going to like it.”

As this exchange from Hitchhikers Guide to the Galaxy shows, there’s always going to be trouble when you expect computers to analyse human behaviour. Despite Facebook’s ‘your year in pictures’ algorithm disaster, it still seems intent on pursuing an AI agenda. Its latest venture is a neural-network-based artificial intelligence tool called DeepText that, it claims, can understand the context of people’s online posts in more than 20 languages. Hmm, good luck with that one.

It’s likely to be a way to make ad placement more relevant and could provide analysis on a scale that would be impossible for a human workforce. That said, would you entrust your ad placement to an AI tool?

Instagram has changed its feed to show users the pictures it thinks they want to see …and 335,000 users have signed a petition for things to be put back the way they were or they’ll stop using it. If the platform has any sense it will listen to its audience…

Occasionally there’s a business story that knocks your (uber stylish fashionista) socks off. And this is it. 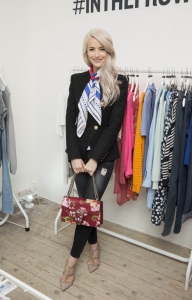 Queen fashion blogger Victoria Magrath of @inthefrow fame is donating any unwanted (worn once, darling) items from her designer wardrobe to a specialist pop-up shop in Covent Garden that’s selling them to raise money for the British Heart Foundation. What’s more, Victoria has got her fellow fashion bloggers to do the same.

Clever, because there’s a fair bit of mutual brand back rubbing going on. Victoria and co appear saintly for simply having a wardrobe clear-out and BHF benefits from the association of cutting-edge fashion with its charity shops while raising vital funds.

Cleverer still, was the launch event and the pop-up were heavily marketed on social media, with more Twitter handles and trending hashtags than you could shake a Burberry handbag at. Even the hangers were branded. Bravo. 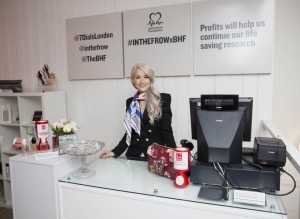 About the Author: Rebecca Davies-Nash

The wittiest writer, discerning cocktail drinker and grammar Yoda you could ever hope to meet. Ah, who am I kidding? I’m not that discerning when it comes to cocktails.